As you start planning for 2019, it’s worth considering the latest trends and shifts in social media budgets – where businesses are spending their money, where they’re seeing the best return and how they plan to approach digital marketing next year.

To help with this, we recently conducted a survey within the Social Media Today community to get some perspective on the latest key trends, and the experiences of our collective community.

The data highlights some interesting trends of note – over the next week, we’re going to analyze each element in detail, starting today with the key channels of focus for social media marketers in 2018, and whether those look set to change moving forward.

For this first aspect, we asked our audience “Which social channels are you currently advertising on?”

Here’s where most social media marketers are currently focusing their efforts: 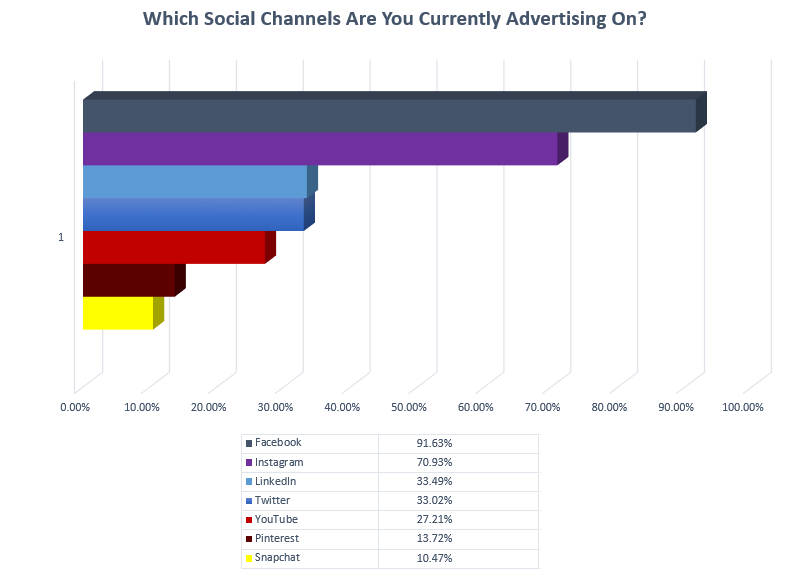 Unsurprisingly, Facebook comes out well on top, with the fast-growing (and Facebook-owned) Instagram gaining in second. Both Facebook and Instagram have the most users (2.2 billion and 1 billion respectively), so it makes sense for them to see the most ad spend. Facebook, too, introduced it’s ‘people first’ algorithm change early in the year, which has pushed many businesses towards Facebook advertising to offset reach and referral traffic declines.

While Facebook has flagged potential revenue growth concerns on its main platform, its fairly clear that The Social Network is in a strong position on this front, and will continue to benefit from having the two biggest social platforms, at least in western markets.

More interesting, however, is the lower portion of the graph. As you can see, LinkedIn comes out just ahead of Twitter, while YouTube is not seeing major investment, and Snapchat comes in dead last.

Those same trends are largely reflected in our follow up question – “How will your advertising change on these channels next year?” – though there are some notable differences. 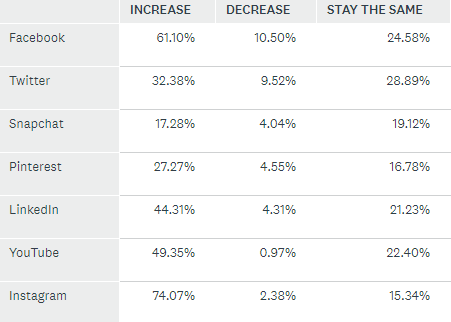 Again, Facebook and Instagram lead the pack – with Instagram set to get a lot more attention – but LinkedIn is also where brands are looking to focus more effort, with YouTube also set to rise.

There are a few elements to consider here – Twitter’s video ad business is growing, but its other offerings haven’t seen any significant shift, while LinkedIn engagement is reportedly at ‘record levels’, which signals something of a revival at The Professional Social Network. Of course, ad spend is relative to the audience – Social Media Today readers may well be more B2B-aligned, hence LinkedIn’s relatively strong performance, but it does show that confidence is growing in LinkedIn’s ad options. And with the platform inching closer to 600 million members, it’s worth considering its potential fit for your campaigns.

It’s also little surprise to see YouTube set to attract more investment. The focus on video marketing has been all about Facebook and Instagram, but this year, YouTube has introduced a range of new options, the most recent being the introduction of targeting for people watching YouTube content on their home TV sets – essentially, as close to a digital version of regular TV ads as you’ll get.

Really, it’s only surprising that YouTube has gotten so little focus this year – expect the Google-owned platform to see an increase in advertiser attention in 2019 as online video becomes further ingrained, leading to new opportunities.

The news is not as good for Snapchat or Pinterest – though worth noting that 17% and 27% of SMT readers do actually plan to increase their ad spend, which far offsets those looking to decrease their focus on both. In fact, overall, the data shows that social ad spend will only go up, with only small numbers in the ‘decrease’ category for each platform.

Snapchat will need to work hard to win advertiser confidence, with many brands still hesitant to invest too much into the formerly ephemeral content platform, while Pinterest’s evolving ad options should help it boost performance in the new year. Both platforms will be making eCommerce a focus – Pinterest is ahead in this regard, though Snapchat’s recently announced partnership with Amazon looks like an interesting proposition. So long as Snapchat’s younger audience actually has the buying power to support such tools.

That’s a key differentiator in the space – Pinterest’s focus on providing more direct shopping options, aligned with its purchase-focused audience, should help it develop its eCommerce tools beyond what Snapchat can offer. Snap, of course, has much better reach with younger users, and that’ll appeal to bigger spending entertainment companies, but Pinterest will continue to present more opportunities for retail and small business advertisers as it’s systems continue to evolve.

Each has its own benefits relative to your brand aims, but its clear that both have some work to do in winning advertiser attention. On the face of it, they may not seem like they’re competing with each other, their audiences are very different. But in terms of where smaller advertisers, in particular, consider spending their ad dollars, likely as a third-string platform to support their Facebook and Instagram efforts, the performance comparison between the two could be a significant factor in boosting their business results.

The results of this first element of our survey show largely what you would expect – the big platforms will continue to suck up the most ad spend, while video remains a focus. But the performance of LinkedIn, and projections for YouTube, are clearly worthy of note.

In the next installment, we’ll look at how businesses are allocating their digital marketing budgets, and what that means for planning moving forward.