Despite ongoing pressure from Facebook, Snapchat has continued to hold its ground – and even take some back, going on its latest performance numbers.

In its Q1 2019 update, Snap has reported a slight increase in active users, and an increase in revenue, which, at least in part, is attributable to its improved Android app.

First off, on users – Snapchat is now being used by 190 million people every day, a slight increase on the previous quarter, though still down on it’s 191 million DAU peak.

Interesting scaling of that graph – its shows almost no perceptible change in the past six quarters, despite the comparatively sizeable declines over the last year. Regardless, Snapchat has added users, which, as noted, can be linked, in some part, to it’s renewed focus on Android, which the company had previously neglected, despite the potential usage gains through expanded access.

Snapchat officially launched its new, faster Android experience earlier this month – as we noted at the time, this is crucial because many people in markets outside North America use Android devices, and thus far, they haven’t been able to get the full Snap experience.

“As of the end of Q1, our new Android application is available to everyone. Compared to the prior version, it is 25% smaller, opens 20% faster on average, and is modularized to allow for efficient ongoing innovation. On some of the lowest-performing devices, this resulted in a 6% increase in the number of people sending Snaps within the first week of upgrading to the new Android build.”

The improvement in Android performance most crucially relates to India, a nation of 1.37 billion consumers, and currently Instagram’s second-biggest market. Android is the most used mobile operating system in India, holding around 90% of the Indian market. Snapchat’s been working on a re-write of its Android app since early 2018, and those efforts do appear to now be providing some gains, and Snap’s expecting to continue to see growth in Android-dominated markets over time. 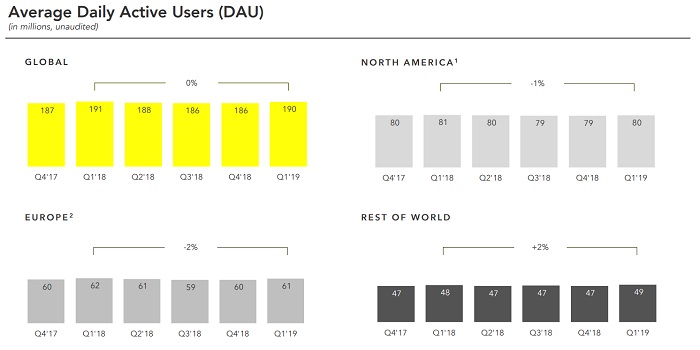 Snap says that its core app now reaches “90% of all 13-24 year-olds, and 75% of all 13-34 year-olds in the U.S.” The app’s youth reach is largely unmatched, and remains a key selling point for Spiegel and Co. – even with the increased competition from Instagram, Snap has been able to maintain its allure with younger audiences, a big tick in its favor.

The downside of that – or at least, a questionable element in reaching younger users – is their actual revenue benefit. Looking at Snap’s Average Revenue Per User stats, you can see that the company still has some work to do in maintaining its momentum, in comparison to Q3 ’18 levels. 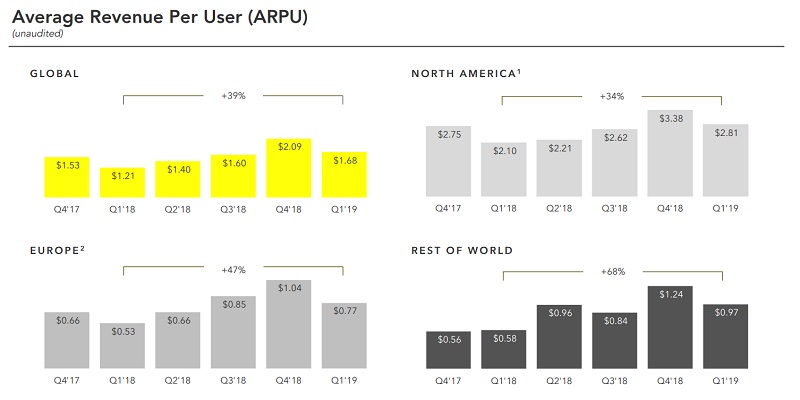 European ARPU declined, which is a concern, though again, Snap would be hoping that its improved Android app will help, especially in the ‘Rest of the World’ category. 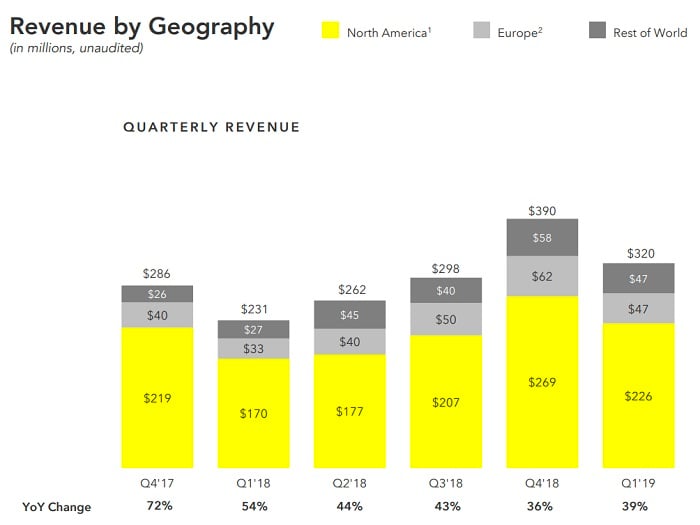 Again, the dominance of those yellow bars highlights the need for Snap to expand its horizons – gone are the days that the company could dismiss markets outside the US, it needs to branch out to regain its full momentum. The concern here is that Facebook, particularly through Instagram Stories, has largely beaten Snap to these regions, but Snap’s hoping, again, that its Android improvements will be enough to spur more usage and deliver improvements on this front.

But that will also increase costs – as noted by TechCrunch’s Josh Constine, higher Android usage will mean higher AWS and Google bills, which, Snap has warned, could lead to increased losses in the next quarter. Another key element to watch in future updates.

On other elements, Snap also says that it’s expanded is Discover content offerings to “more than 450 premium content channels worldwide”. Snap has also doubled the number of non-US partners it’s working with, and launched over 50 new shows and Publisher Stories in international markets

“After seeing incredible engagement with Snap Originals, we will be launching 10 new original shows while also renewing some of last season’s hit shows. The number of people watching Discover and their time spent watching content continue to grow as Discover becomes part of their daily routine. In Q1, nearly half of our daily Discover viewers watched Discover every day of the week.”

Snap has also noted that its audience is now spending “more than 250 million minutes playing with AR experiences every day on average in the Snapchat camera”, a 10% increase in play time per DAU compared to last year. Given it’s evolving AR ad offerings, this is definitely an element that Snap will be keen to maximize and showcase.

The challenges before Snap remain significant, the competition from Facebook, in particular, is a looming threat. But it’s learning how to capitalize on its core strengths, and the value of expansion, which could light a more viable pathway to sustained business success.